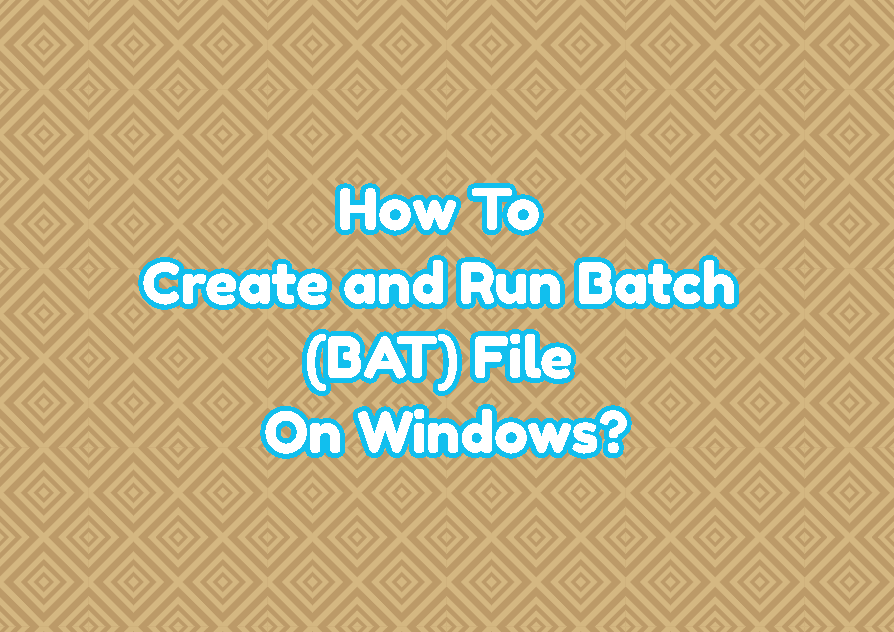 A batch file is a file that contains MS-DOS commands and when the batch files are clicked or called these commands are executed. Batch files also called BAT files. Most of the operating systems like windows provide the ability to create and run batch files. In this tutorial, we will learn how to create a batch file for MS-DOS and PowerShell, How To Run, or Execute Batch File?

Batch files are supported by all modern Windows operating system versions like Windows XP, Windows 7, Windows 8, Windows 10 and Windows Server versions. But the batch files contents like commands, binaries and features should be compatible with the current operating system in order to execute in reliable way. If specific command, binary or feature is not supported it will be skipped and not executed but others lines of batch file will be executed.

What Is Batch File?

Before starting to create and running batch files we should learn what is a batch file. A batch file is a simple text file that has the *.bat file extension and contains MS-DOS commands or binary files. Batch files also balled as BAT files because of their extension. Batch files are popular among system administrators and technical people in order to complete repetitive or non-interactive jobs easily and reliably. Even interactive jobs can be completed with batch files with little or no effort or action.

Batch or BAT files are a lot of advantages for Windows users. Below we will list some of them.

Batch files are a simple text file which contains MS-DOS and related commands and binaries. First, open Notepad and create a file and save the file whatever name you want but set the file extension as *.bat .In this example we will create the batch file named runwise.bat . Batch files may also use extensions like .cmd and .btm.

The saved batch file will look like below. As you can see the batch files or files with *.bat extension has the following file icon which simply used for system-related files. By default, the .bat extension is not displayed.

Scheduled Tasks is a tool used to schedule different jobs or tasks to run the future at the specified date or time or repetitively etc. It is recently called as Task Scheduler and can be opened by typing schedule in the start menu like below.

In the following screen we will set the name of the task which is not the batch file name. Then we will click to the Next .

In the following screen the date or time of the execution will be specified. The batch file will be executed at the specified date, time or interval.

As we have selected daily the start date with the time and recur count will be provided in the following screen.

This step is important where we will select the Start a program in order to specify our batch file to execute.

Following screen is the last screen where we all information about scheduled batch job will be displayed.

Or alternatively the complete path of the batch file runwise.bat can be provided from any directory like below.