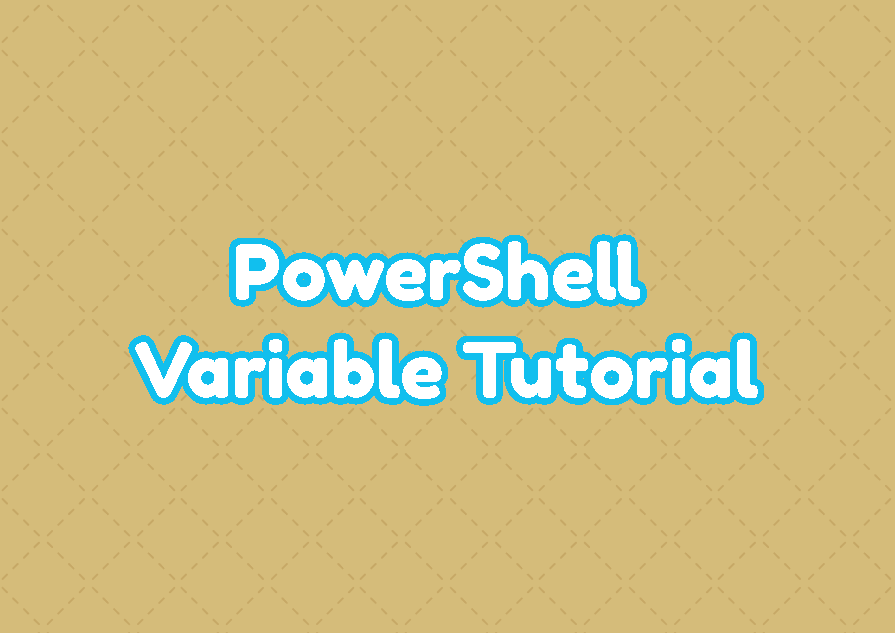 PowerShell is a very advanced scripting and programming language that supports the variables. Variables in PowerShell can be used to store data like integer, number, string, text, date, time, object, etc. For example, a PowerShell variable can be store a command output in a structured way as we can also call it an object.

In PowerShell, variables can be defined in different ways. A variable is prefixed with the $ sign in order to express that this is a variable. In the following example, we will create a variable named $myvar . We will do not set any data into this variable which means a variable defined without any first value will be an empty variable.

Alternatively, we can create or define a variable by assigning a value to it. In the following example, we will create a new variable $age and set 25 as a value.

PowerShell provides commands or cmdlets. These command results can be also used to create a variable and set the value of the variable. In the following example, we will use the Get-Process command which returns currently running processes. The returned value will be set for the variable named $process.

As an object-oriented and .NET supported programming language it supports different object types. So the PowerShell provides complex types for different classes.

See also  What Is The Latest Version Of Windows 10 As Today?

PowerShell provides the New-Variable command which is used to create and define a new variable with different properties like Name, Visibility/Scope, Value, etc.

In PowerShell every variable is an object even it contains basic values like string, integer, etc. PowerShell objects provide the GetType() method which returns the type of the given object.

As the GetType() method returns the type object it provides the full name of the given object type with the FullName attribute like below.

All PowerShell variables can be listed by using the ls variable:* or Get-Variable commands. These commands will list currently existing variables with their values.

After creating a variable we can change its value. As the term suggest variable its content and data are also variable. A variable value can be changed by using the equal sign which is used assignment.

PowerShell also provides the Set-Variable command in order to change and set variables. The set variable is very similar to the new variable where the -Value property should provide the new value like below.

By default defined variables are visible to everyone who can access the PowerShell environment. Other users can easily access the variable. The Set-Variable command is used to make a variable private. The -Visibility option set as Private below.

The official command to print a variable in PowerShell is the Get-Content.

Out-File is used to print the given object or variable content into the specified file.

CSV is a file format where columns are separated with a comma by default. A variable can be printed with the Export-CSV method like below.

After a variable is created in PowerShell is exist until the current session ends or the script ends. But this may create collusion if we need to create new variables. But existing variables can be removed by using the Remote-Variable command or Remove-Item command.

In order to remove or delete a variable with the Remove-Variable command the -Name property should be used to specify the variable name. In the following example, we will delete the variable named $age.

The Remove-Item command is used to remove different data from the PowerShell. It is a generic command to remove registry, objects, etc. So in order to remove a variable the -Path property will be used with the Variable:\VARNAME type with the VARNAME which is the variable name. In the following example, we will remove the variable named $age.